February 2020 Saint-Barthélemy — Many dream of owning a place on St Barts and once that vision becomes a reality, tailoring the property to personal fit becomes the priority.  Thus frequently heard questions on St Barts are :

What am I allowed to build?

What are the building regulations?

Although the specific details of the St Barts building regulations frequently change, the general ideas have remained broadly consistent and tend to focus on constraining new buildings to fit within the existing context of St Barts.  Thus aside from standard fire & safety concerns that are a part of building codes everywhere, in St Barts the regulations have evolved to include natural  environment, size, and traditional style.  Of course, there are exceptions as some old buildings are obviously grandfathered in by predating the current regulations.  And not surprisingly, the rules can be different in the commercial or industrial zones (e.g., Gustavia, Public, etc.) but generally speaking the guidelines below apply to any new residential building or villa on St Barts.

Just a couple of generations ago, St Barts was a blue (sea & sky) and green (verdant hillsides) hued paradise with most residential dwelling clustered amongst the relatively flat lands near near beaches like Saint-Jean and Lorient or the harbor of Gustavia.  But as interest in St Barts grew, newer properties began to climb the hillsides in search of privacy and grander ocean views. 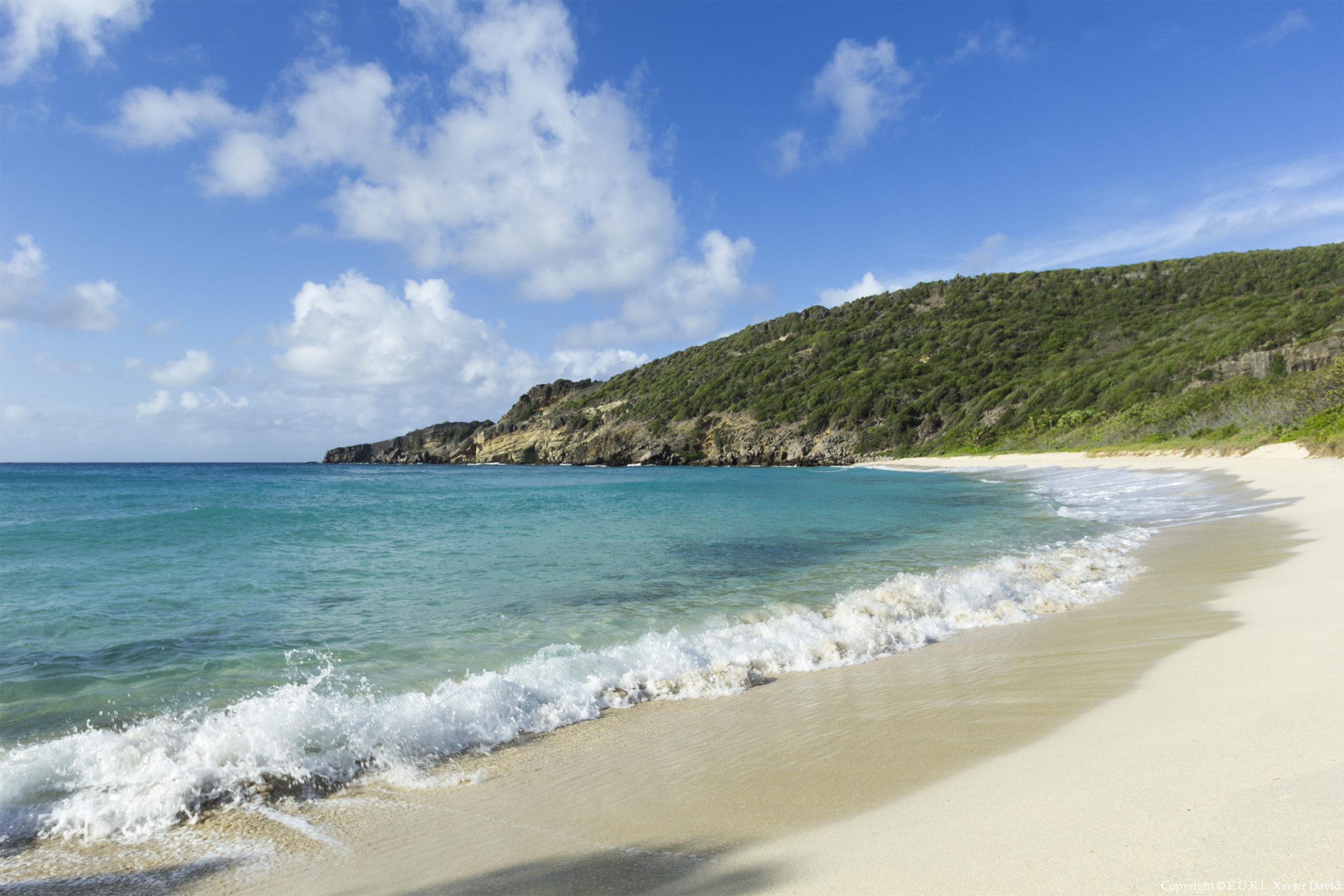 Not surprisingly, in recent years a zoning map has been enacted to protect the most vulnerable areas of natural habitat.  For example, large swaths of Saline, Gouverneur, Toiny and Colombier are completely unbuildable as per law.  Elsewhere on the island, it can be more complicated as many parcels of land are zoned as partially buildable and partially unbuildable.  Before purchasing property on St Barts, it is highly advisable to check the zoning map and consult with an architect on the feasibility of any new construction or renovation plans.

Secondly, within a property it is typical that 40–60% of the overall surface area must be unbuilt and remain either natural vegetation or garden.  Moreover, to mitigate the rising problem of stormwater drainage during heavy rainfalls, 30–50% of the property must be permeable surface to prevent large swaths of pavement creating excessive runoff of rain water into public roads.

A common first impression upon arrival on St Barts is that everything is small.  The island is small.  The airplanes are small.  The roads are narrow and the cars are small.  Thus it is hardly any surprise that the houses are small too.  In the old days, homes were small because nobody could afford the expense of building a large house.  But as wealth has increased and villas grew larger, regulations have been enacted to avoid large villas from overpowering their neighbors.

Firstly, nearly all villas are now limited to a single story of height.  Although there may appear to be exceptions, close inspection typically reveals that the villa is constructed or terraced into a sloping hillside in such a manner that it only appears to be two stories tall.  Secondly, new buildings are now limited to a maximum footprint of 150 square meters in residential neighborhoods and 200 square meters in urban areas.  Even on an exceptionally large parcel of land, no single building will be permitted to exceed this limit. Consequently, many of the largest villas on the island are actually a collection of smaller buildings detached from each other. 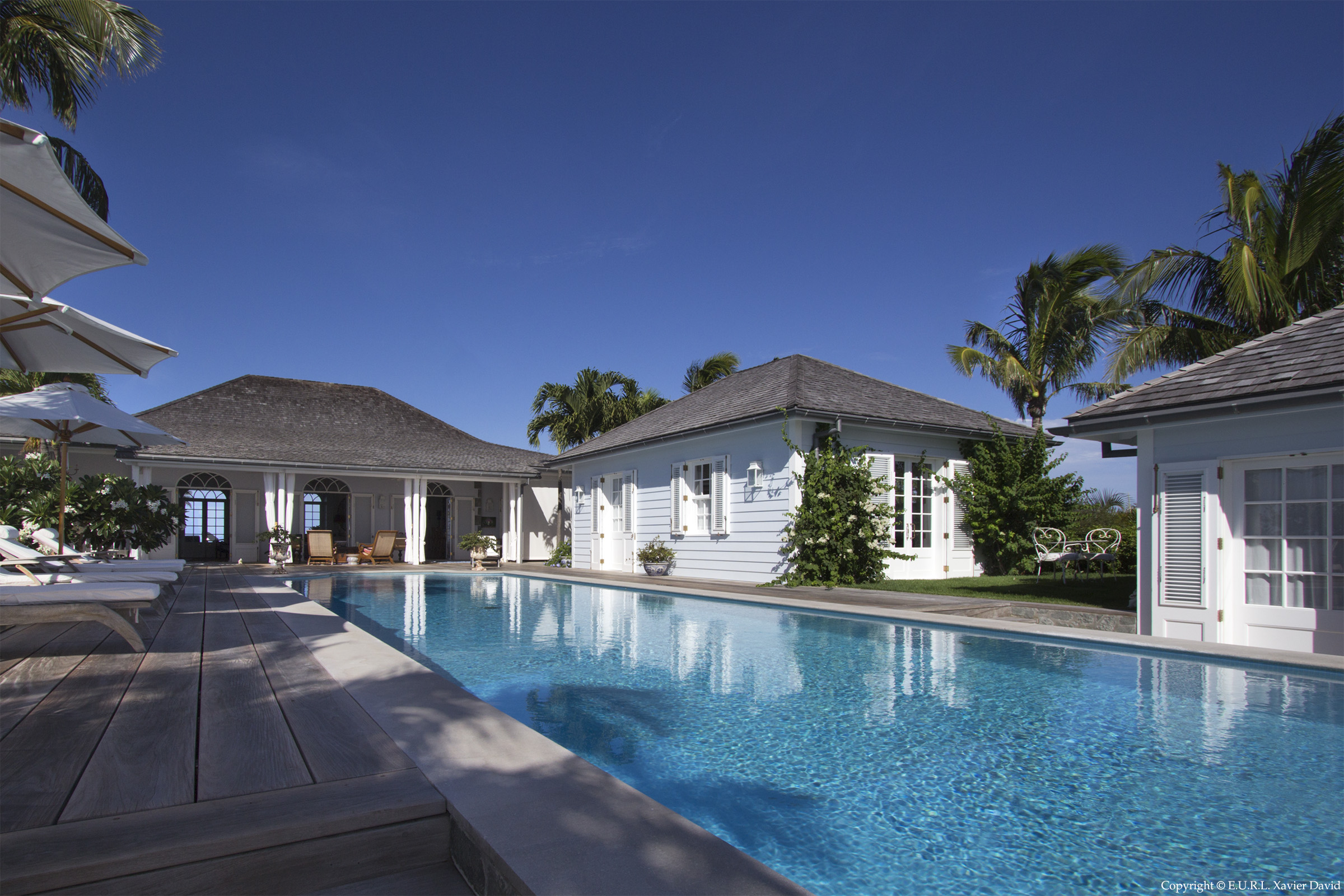 Although official regulations supporting traditional St Barts architecture are few, they are very effective.  Specifically, the regulation that at least 70% of a building’s roof must be a hip roof (that is, a four-sided pitched roof) succinctly dictates that nearly all new buildings will—at the very least—allude to and evoke the traditional gestalt of St Barts’ case or huts. 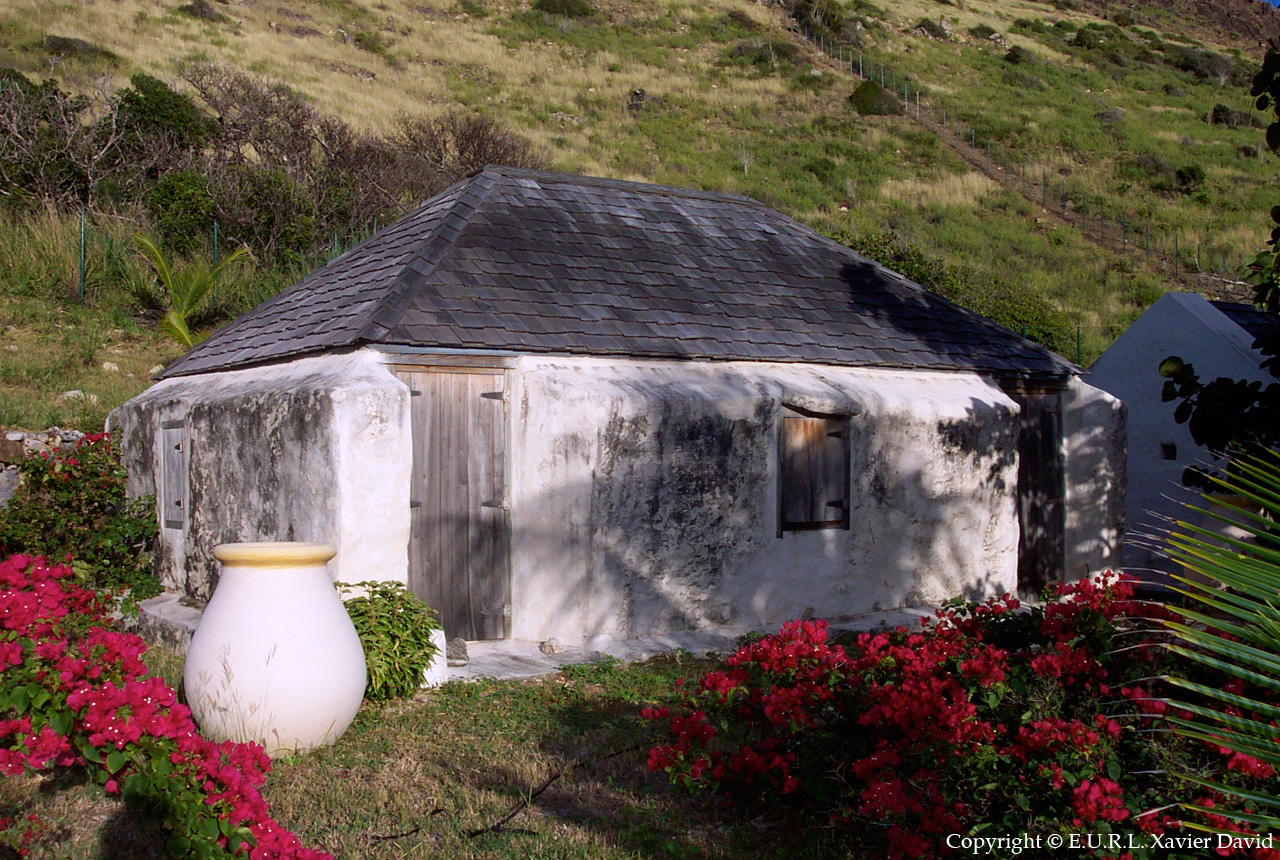 It is also important to understand that the traditional case a vent (wind hut) or case en bois (wood hut) was not the result of an architect’s design decision.  Instead these huts are a grassroots, bottom-up response to the need of dealing with the fierce winds of the tropical storm season in the Caribbean.  Simple in design, these huts are remarkably aerodynamic and the four slopes (ideally between 30° and 50°) of the roof evenly distribute the wind loads to the four walls below.  From those modest roots born of necessity, the hip roof has evolved to become emblematic of St Barts architectural aesthetic and can accommodate both traditional and contemporary styles. 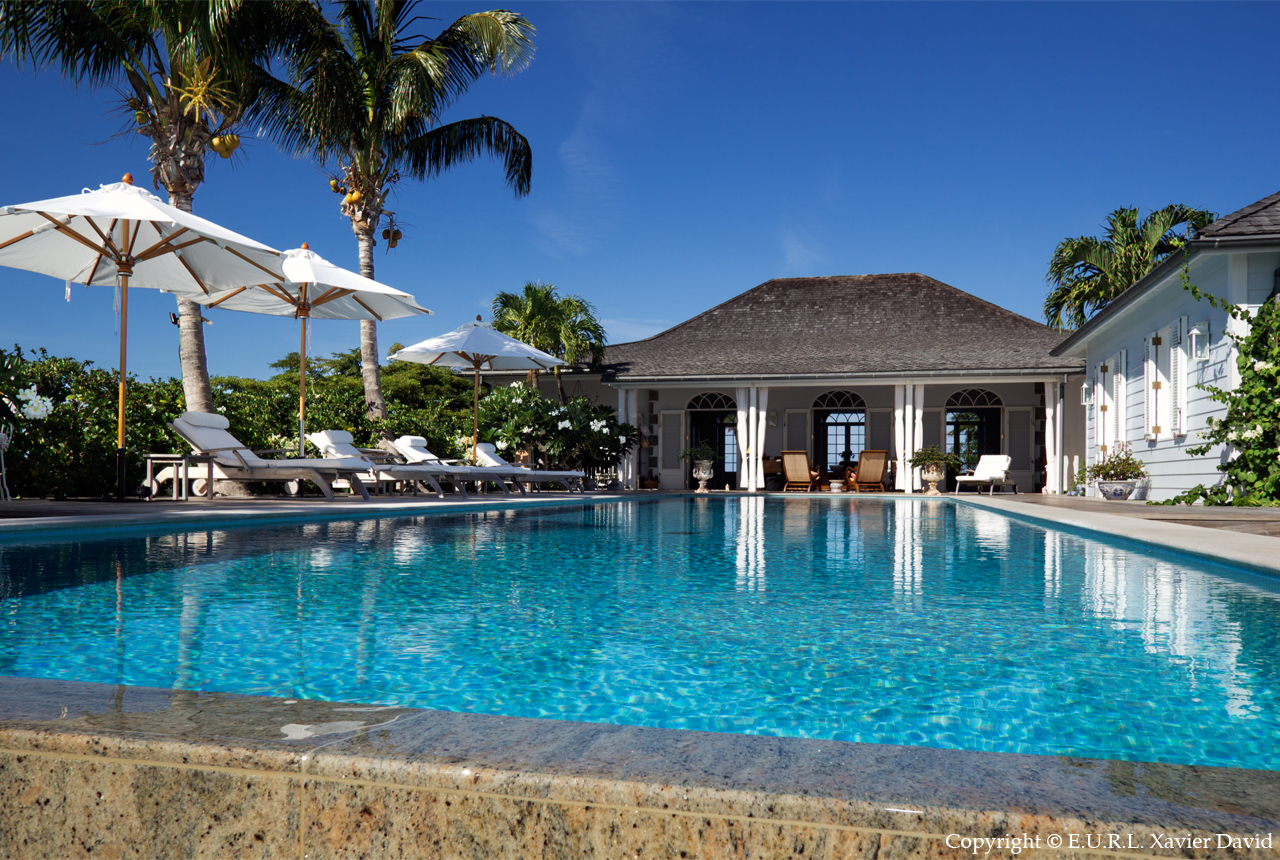 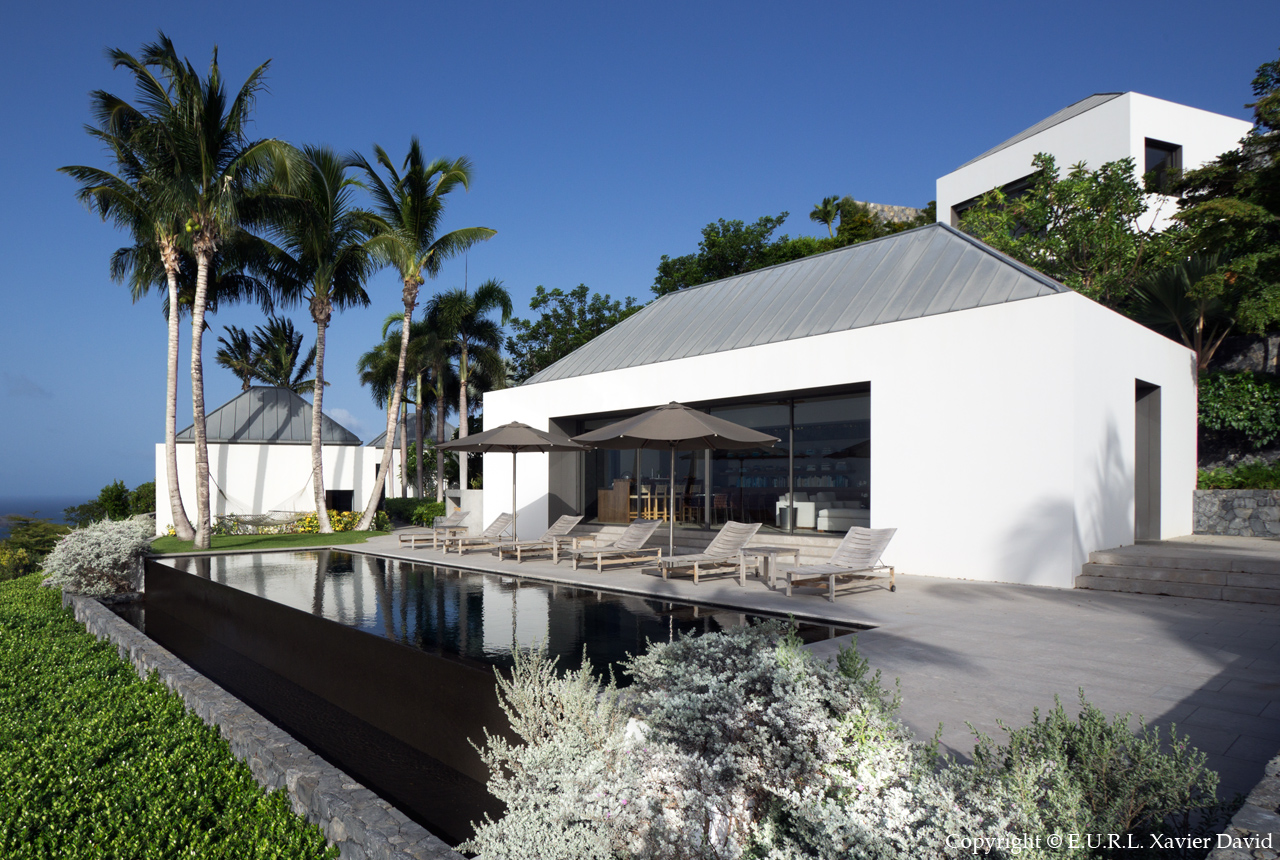 Though not exhaustive, this article has presented an overview of the regulations that impact most of the building projects on St Barts.  Moreover, these regulations have been presented within their respective geographical, historical and cultural contexts such that one understands that they are not arbitrary rules from bureaucrats but rather represent a holistic expression of the spirit of St Barts:  natural, modest, and timeless. 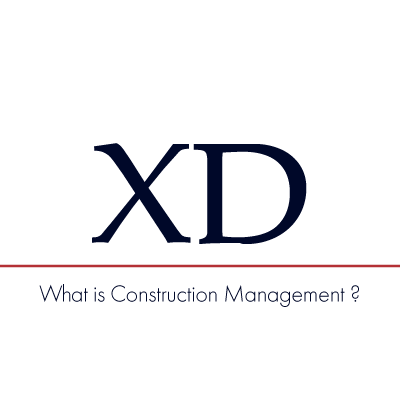 What is Construction Management?

Note:  This is the initial article in a 6 part series...